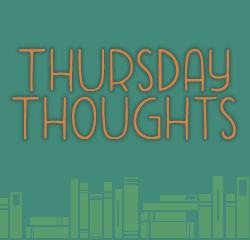 Hey, guys! Welcome to Thursday Thoughts! This is an original, interactive, weekly meme here on my channel. Anyone with an opinion is invited to make a post, link up and join the conversation. We would love to hear what you have to say! This week's topic is one that was inspired by a YouTube video I watched recently. You may or may not know that I've become a HUGE comic fan over the last few months or so. I've found tons of awesome channels that have content dealing with things like that. One I particularly love is called The Wulff Den. These two brothers post three videos a week about comics, video games and general, relevant discussion topics. Recently, they did an entire week dedicated to sexism in nerd culture and how it was something that should be addressed. Their videos that week totally hit home for me and I thought this would make a fantastic Thursday Thoughts topic since it's selfishly something I feel like I have a thing or two to say about. If you want to take time to check out Will and Bob's videos from that week you can find them HERE, HERE and HERE. And, if you subscribe to them you should totally comment and tell them you were sent by Ashley from OkLetsRead. Just saying.

I want to start out on the topic of girls reading comics (or guys reading traditionally female genres of books) and then later on we'll talk about sexism actually in the pages of comics (which isn't quite as apparent in non-comic literature, however I still think it's there.) As a girl, I know what it's like to walk into a comic shop and have a patron look at me with an expression that reads like "What is that 17-21 year old female doing in a comic book store? Is she lost?" No, sir. No, I am not lost. I'm here to buy comic books just like you are. However, I can understand where those guys are coming from. I almost never feel that vibe from the people who work in the store. It's usually other customers. That got me thinking; Why is that? I think it's because the people who are in the comic book store all day have had the realization that times are changing. A Facebook poll of self-identified comic book fans back in February stated that 46.67% of those people are female. THAT'S AMAZING. And, I'm sure it doesn't take a genius to realize that that's the highest that statistic has ever been. To be fair, I don't think that that stat is the most accurate ever, but I can say without a doubt that somewhere between 25% and 50% of the comic book readership are women. Thirty years ago, that statistic would be absolutely shocking.

The main point I want to get across when it comes to comics is that girls can read and enjoy comic books too and it's totally okay! I should be able to walk into a comic store and feel normal and accepted. Fortunately my local comic shop is phenomenal (the bad experiences were in other shops) and is full of happy people who are willing to be helpful and friendly regardless of gender. I don't want to get too into the topic of cons. If you'd like to hear the opinions I agree whole-heartedly with on the topic of sexism in nerd culture in general, click the third and final link above. They do a great job explaining why girls can be nerds too, girls can dress as skimpy or not-skimpy as they want to in cosplay and shouldn't get harassed regardless and anything else you can think of on the matter. Basically, go watch that video. You won't regret it. It's great.

Now, within comics things are a little different. Because comic books have been for a long time a strictly-male readership, it makes some sense that they would be targeted towards men. Comics are full of mostly male characters and (although a lot less than video games) lots of scantily clad ladies. Women in comics are often portrayed solely as secondary characters or love interests. And, often times those characters end up being treated badly or killed off. I would be lying if I didn't make a point to say that comics have really stepped up their game over the past years. There are lots of female heroes and main characters now who are portraying women in a great light and making the changes necessary for growth. But, to say that things have changed completely would also be a lie. More or less, I think thing are looking up, but it's all a matter of how much time it will actually take for things to change.

In my post, I talked exclusively about comics because it's just what I've been into lately. Also because it's something I relate to a bit more as a female comic fan. But, that doesn't mean I'm not interested in the other side of things! I would love to hear what you all have to say about gender bias and sexism in books in general. Did you make a post that dealt more with text-only books and focused more on sexism against men? I would LOVE to hear your thoughts! Make sure to link up below or comment with your opinions. Also, don't forget to come back next week when we discuss Advanced Reader Copies or ARCs! See ya then!