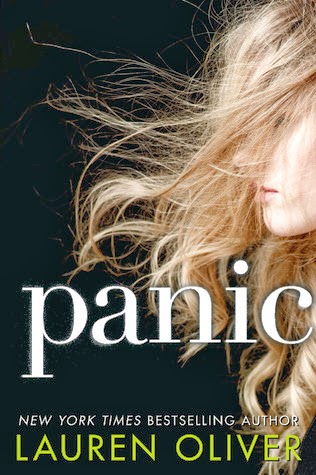 "Panic began as so many things do in Carp, a dead-end town of 12,000 people in the middle of nowhere: because it was summer, and there was nothing else to do.Heather never thought she would compete in Panic, a legendary game played by graduating seniors, where the stakes are high and the payoff is even higher. She’d never thought of herself as fearless, the kind of person who would fight to stand out. But when she finds something, and someone, to fight for, she will discover that she is braver than she ever thought.Dodge has never been afraid of Panic. His secret will fuel him, and get him all the way through the game, he’s sure of it. But what he doesn't know is that he’s not the only one with a secret. Everyone has something to play for.For Heather and Dodge, the game will bring new alliances, unexpected revelations, and the possibility of first love for each of them—and the knowledge that sometimes the very things we fear are those we need the most."

Finally, I'm getting this review written. I've been putting this off for a little while now and I'm not sure exactly why. I've been going through a bit of a reading/blogging slump lately so that could contribute to my hesitation. Plus, my feelings are rather mixed on this book, so I think I was a little unsure how to approach writing this in the first place. Regardless, I'm excited to finally share this review with all of you because I was initially really excited to pick up this novel and I feel like reading reviews for a book like this has the ability to be incredibly helpful in deciding whether or not it's a book you're interested in, even more so than with other books. So, without further ado, let's just jump into the actual review.

If you aren't aware, Panic is a standalone YA, contemporary novel written by Lauren Oliver. Oliver is also the author of the popular Delirium series. I'm really glad this book is a standalone because as a series I feel like this plot and the idea surrounding this story would get old really fast. The story revolves around a small town called Carp where nothing exciting really ever happens. Each Summer, the graduating high school seniors hold an event called Panic which is essentially a Fear Factor-esque series of challenges throughout the season. The winner receives the giant pot of money collected throughout the year, so clearly there's tons of incentive to participate since everyone wants to leave Carp after graduation. The story follows a girl named Heather, a boy named Dodge and Heather's best friends; Nat and Bishop.

The book is told from the points of view of Heather and Dodge. To be honest, I found Heather to be a little irritating at times. I found myself thinking she was a bit whiny and also kind of.. stupid, for lack of a better word. Sometimes I felt like she was really irrational and didn't think even remotely logically about her decisions. Perhaps that was the direction Lauren Oliver was attempting to take Heather's character, but whatever the reason, it still just kind of rubbed me the wrong way. Dodge was a bit more likable in my opinion, however again I didn't like him all that much either. Again, he was a bit irrational as well and his motives seemed to shift in an unbelievable way. There were moments in this book that kind of brought me out of the story and made me go "What...?" while scratching my head. And, not in a good way. The only character that I really enjoyed was Bishop, and he's not in the action of the book nearly as much as some of the other characters. At the same time, I want to mention that I'm being a bit harsh on these characters. As irritating as some of them were to me, they were still bearable and I think that's what it really comes down to.

The plot of Panic is definitely story-driven, but.. not really? It's almost hard to explain. This book is really quite odd in that it all felt a bit disconnected for me. I did enjoy the suspenseful parts of the book and there were many things that kept me intrigued throughout the story. There was never a time where I felt like I wanted to put it down, but I didn't really want to pick it up either. Like I mentioned in the last paragraph, there were moments in the story that kind of brought me out of the book and got me scratching my head. In addition, there were a lot of little, almost irrelevant plot lines that I felt just sort of disintegrated once they were brought up. It was like occasionally something unrelated to Panic would happen and then once that scene was over it was barely like it even happened.

I read this book as part of the Booksplosion read-a-long for March and, although I watched their liveshow discussion video, all of these thoughts have been my own and things that had already occurred to me before hearing their opinions. However, something that they brought up really resonated with me and I can totally understand why they said this. They said that Panic would translate much more appropriately as a movie than a book. I couldn't agree more. The action packed scenes that take place during the Panic challenges would translate amazingly to screen and I feel like the parts of the book that felt a bit more slow paced would be quickened up and more entertaining to watch than to read. Typically, you hear people say that the books are always better than the movie versions. But, in the case of Panic I think it would definitely be the other way around.

Now, despite how harsh this review turned out being, I did enjoy reading Panic overall. In hindsight, it wasn't a bad book by any means. I'm not the biggest contemporary reader and, although it wasn't he mushy gushy jam-packed-with-love type of contemporary, it was still a contemporary book nonetheless and therefore not exactly my cup of tea. When I review and rate a book I've read, I sometimes like the take myself out of the situation and think of it from someone else's point of view. Even though I'm not the biggest fan of this novel, I don't by any means think it wasn't worth reading and nor do I think it deserves a low rating. This is why I ended up rating Panic a 4/5 stars. Although it wasn't for me, if the synopsis above and this review haven't deterred you from reading this novel I definitely think you should pick it up.